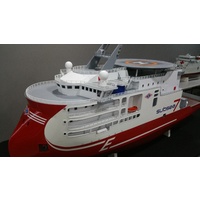 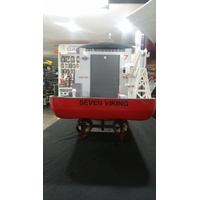 Notify me when back in stock

Please tick this box to proceed.

PLEASE NOTE: This is for the in store DEMO model, pickup from RC Crew only due to high shipping costs. If you would like shipping quote, please call or email us first, info@rccrew.com

Seven Viking measures 106.5m in length and has a moulded breadth of 24.5m. The compacted dimension of the vessel, featuring the SX148 design, will enable it to access difficult areas and operate in confined spaces between offshore platforms. The deck of the vessel covers an area of about 830m² and the vessel has a gross tonnage of 11,266t.

The depth of the vessel to the main deck is 11.5m and the maximum draught is 8m. The designed operational draught is 6.5m.

The vessel features a helideck that is capable of accommodating SuperPuma and Sikorsky S-92. The helideck measures 26.1m in diameter and has capacity of 12.8t.

Two lifeboats are incorporated into the vessel. The boats have capacity of 48 people, and there are two marine evacuation chutes (MES) with a capacity for 65 persons each and a fast rescue craft (FRC).

The vessel is also fitted with a ballast water treatment system, environment friendly lighting systems and a fire detection and fire fighting system.

Seven Viking is a subsea inspection, maintenance and repair (IMR) vessel designed to operate under severe conditions in the North Sea. The vessel is co-owned by Subsea 7 and Eidesvik and was constructed in collaboration with Ulstein.

The naming ceremony for the vessel was held in January 2013 after it cleared sea trials, which commenced in November 2012. She was earlier launched in October 2012 from the dock hall at Ulstein Verft where she was constructed. The cost of construction of the vessel was about NOK 1bn ($181m).

Designed with an X-Bow hull line, Seven Viking will now serve Statoil, confronting extreme conditions in the North Sea, for a period of five years.

Be The First To Review This Product!

Help other RC Crew users shop smarter by writing reviews for products you have purchased. We may collect the following information:

What we do with the information we gather

We require this information to understand your needs and provide you with a better service, and in particular for the following reasons:

We are committed to ensuring that your information is secure. In order to prevent unauthorised access or disclosure, we have put in place suitable physical, electronic and managerial procedures to safeguard and secure the information we collect online.

A cookie is a small file which asks permission to be placed on your computer's hard drive. Once you agree, the file is added and the cookie helps analyse web traffic or lets you know when you visit a particular site. Cookies allow web applications to respond to you as an individual. The web application can tailor its operations to your needs, likes and dislikes by gathering and remembering information about your preferences.

We use traffic log cookies to identify which pages are being used. This helps us analyse data about web page traffic and improve our website in order to tailor it to customer needs. We only use this information for statistical analysis purposes and then the data is removed from the system.

Overall, cookies help us provide you with a better website, by enabling us to monitor which pages you find useful and which you do not. A cookie in no way gives us access to your computer or any information about you, other than the data you choose to share with us. You can choose to accept or decline cookies. Most web browsers automatically accept cookies, but you can usually modify your browser setting to decline cookies if you prefer. This may prevent you from taking full advantage of the website.

Links to other websites

Our website may contain links to other websites of interest. However, once you have used these links to leave our site, you should note that we do not have any control over that other website. Therefore, we cannot be responsible for the protection and privacy of any information which you provide whilst visiting such sites and such sites are not governed by this privacy statement. You should exercise caution and look at the privacy statement applicable to the website in question.

You may choose to restrict the collection or use of your personal information in the following ways:

You may request details of personal information which we hold about you under the Data Protection Act 1998. A small fee will be payable. If you would like a copy of the information held on you please write to 124 Eldridge Road Condell Park NSW 2200.

If you believe that any information we are holding on you is incorrect or incomplete, please write to or email us as soon as possible, at the above address. We will promptly correct any information found to be incorrect.

The table below lists the cookies we collect and what information they store.

Add your favourites to cart

Your purchase will be split into 4 payments, payable every 2 weeks

All you need to apply is to have a debit or credit card, to be over 18 years of age, and to be a resident of country offering Afterpay

Late fees and additional eligibility criteria apply. The first payment may be due at the time of purchase
For complete terms visit afterpay.com/terms