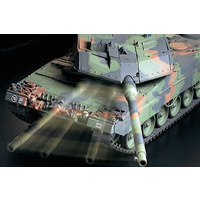 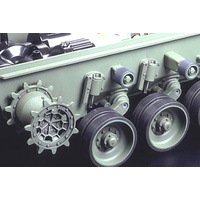 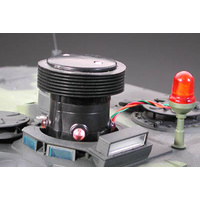 Notify me when back in stock

Please tick this box to proceed.

About the Leopard 2 A6

Used by more than 10 European nations, Germany's Leopard 2 tanks are a perfect balance of firepower, protection, mobility and availability. With the Leopard 2A5 regarded as the most powerful tank in the world with superior protection and fire power, the latest Leopard 2, the 2A6, features an even more powerful weapon system. The Leopard 2A5 featured replaceable wedge shaped armor on the turret, improved PERI-R 17 panoramic Commander's sight with thermal vision, spall liner on the turret interior for protection against splinters, all-electric gun control and stabilization system for easy maintenance and reduced noise, GPS navigation system, electro-pneumatic driver's hatch and a CCD camera mounted on the rear of tank for high-speed reversing. The Leopard 2A6 featured improved firepower including a 55 caliber 120mm smoothbore main gun utilizing kinetic energy LKE II ammunition for higher muzzle speed and lethality. The 2A6 has been employed by the German 403 tank battalion since March 2001, and is scheduled to replace all German 2A5 tanks by 2006. The use of the 2A6 continues to spread throughout Europe with the Netherlands, Spain and Greece adopting the 2A6 for their main battle tank. With continued improvements the 2A6 continues to set new standards as the world's best MBT.

The T-07 DMD unit provides the 1/16 R/C Leopard 2 A6 with more features than any other Tamiya R/C tank. The T-07 unit matches engine sound (which has been digitally recorded from a real MB873-Ka501 turbo-charged diesel engine) with tank movements, and controls various lightning combinations activated easily with transmitter. Turret rotation, gun elevation and firing sounds also add to the realism of this model. The T-07 unit and 7.2V battery are mounted in the turret for easy and quick accessibility.

The R/C Leopard 2 A6 is equipped with a sound speaker unit mounted at the center of the hull. A xenon flash tube is used to make gun firing more convincing. When fired, main gun recoils and then goes back smoothly to its initial position thanks to a gearbox mounted in the turret. Of course, these actions are coupled with sound effects which have been digitally recorded from the actual tank.

The R/C Leopard is powered by 2 high-torque Type 540 motors. A specially designed gearbox allows smooth power transmission at both low and high speeds. This system accurately imitates the transmission of the actual tank. One motor controls forward/backward movement and the other motor allows the tank to turn and rotate. Suspension comes equipped with torsion bars that give this model high mobility.

In order to obtain smooth rotation, the turret ring has been equipped with 20 steel balls. The newly designed system for gun elevation and recoil effect features a servo for more realistic movements. While rotating turret with gun in lowered position, the gun automatically raises and goes back to its initial position to avoid the engine deck, like the actual tank.

Kit includes die-cast sprockets and lathe-turned aluminum gun barrel. The double-pin tracks, which are equipped with pads made out of rubber like the actual tank, come pre-assembled. In order to obtain an even more striking feel of realism, mesh of the baskets mounted on rear of turret, and grills on the engine compartment cooling fans have been reproduced with photo-etched parts.

Be The First To Review This Product!

Help other RC Crew users shop smarter by writing reviews for products you have purchased.

More From This Category We may collect the following information:

What we do with the information we gather

We require this information to understand your needs and provide you with a better service, and in particular for the following reasons:

We are committed to ensuring that your information is secure. In order to prevent unauthorised access or disclosure, we have put in place suitable physical, electronic and managerial procedures to safeguard and secure the information we collect online.

A cookie is a small file which asks permission to be placed on your computer's hard drive. Once you agree, the file is added and the cookie helps analyse web traffic or lets you know when you visit a particular site. Cookies allow web applications to respond to you as an individual. The web application can tailor its operations to your needs, likes and dislikes by gathering and remembering information about your preferences.

We use traffic log cookies to identify which pages are being used. This helps us analyse data about web page traffic and improve our website in order to tailor it to customer needs. We only use this information for statistical analysis purposes and then the data is removed from the system.

Overall, cookies help us provide you with a better website, by enabling us to monitor which pages you find useful and which you do not. A cookie in no way gives us access to your computer or any information about you, other than the data you choose to share with us. You can choose to accept or decline cookies. Most web browsers automatically accept cookies, but you can usually modify your browser setting to decline cookies if you prefer. This may prevent you from taking full advantage of the website.

Links to other websites

Our website may contain links to other websites of interest. However, once you have used these links to leave our site, you should note that we do not have any control over that other website. Therefore, we cannot be responsible for the protection and privacy of any information which you provide whilst visiting such sites and such sites are not governed by this privacy statement. You should exercise caution and look at the privacy statement applicable to the website in question.

You may choose to restrict the collection or use of your personal information in the following ways:

You may request details of personal information which we hold about you under the Data Protection Act 1998. A small fee will be payable. If you would like a copy of the information held on you please write to 124 Eldridge Road Condell Park NSW 2200.

If you believe that any information we are holding on you is incorrect or incomplete, please write to or email us as soon as possible, at the above address. We will promptly correct any information found to be incorrect.

The table below lists the cookies we collect and what information they store.

Select Afterpay as your payment method

Use your existing debit or credit card

Complete your checkout in seconds

All you need is:

1) A payment card; 2) To be over 18 years of age; 3) Resident of country offering Afterpay